This week I looked at the communication between the EC H8S and the PMH4. The PMH4 (likely power management hub) is an ASIC which takes care of the power control. It controls who get’s power and who not. It doesn’t do any high level work, more like a big logic gatter. The PMH4 has inputs from several power good pins from different power rails and chips. On the output side it controls some power rails. It can also reset the H8S. The PMH4 also knows over some pins in which power state (ACPI S0,S4,S5) the board is. It doesn’t do any high level work. It’s more like a big logic gatter. There are no ADC on any power lines. 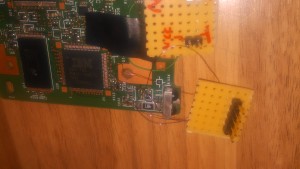 I connected a buspirate in SPI sniffer mode to debug the protocol. But the output looked a little bit strange. There was no data from the PMH4 to H8S (MISO) and the data comes in burst. To get more knowledge on the protocol I used a digital oscilloscope.

The protocol doesn’t look like SPI. LE get’s low after every transmission, ~OE is just high, clock and data just transfer the data. Sometimes when the H8S gets an interupt the Clock pause for some time and continues with the data afterwards. The clock is around ~400kHz.

I confirmed the protocol via the oscilloscope, but still I don’t get any sign from the board. No fan, nothing else. There must be more than this single transmisison. Maybe the board is to much damaged. My modified board was already broken when I got it. There is a loose connection related to the cardbus. Maybe this is my problem I don’t know.

I’ve two board with two connectors for the PMH4 here. Why not using the OEM one as starter help for the other one?

I think the PMH4 does what it should do. The H8S has an digital-analog-converter pin connected to the video brightness. But I haven’t implemented it yet. But I don’t think the device booted, because neither the CPU nor the chipset produce any heat. Ok, maybe it does, I only used my finger as thermometer. A thermal camera would help here. I’ll borrow a thermal camera for that.

There are lot of pins which I ignore atm. E.g. A20 pin. Is there something to do in a specific time serie?

My requirements to the bootloader are

I2C pins are a lot easier to find and modify than the H8S UART. I’m not yet sure if the H8S should be the master or the slave and on what address he should use? Multiple? UART tx is working. Rx is a task to do.

On newer board the PMH interfaces changed (>= x60, t60, …). They merge the LPC interface and the XP interface into an protocol over SPI. And the new PMH is used as GPIO expander as well. 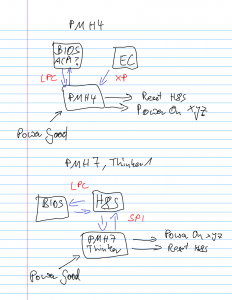