Wow, what a whirlwind the last few weeks has been. I have been in the road for several weeks and finally on the last flight before home. Travel is funny. It seems like a busy, hectic, whirlwind, but it is also a lot of time to sit and reflect with little interruption. Since leaving Bonn, I have been trying to put together my thoughts about all information, discussions, and ideas that took place over the three days.

My overall impression is: Damn! What a great group of individuals we have working on coreboot.  It takes a lot of work to put together an event and Carl-Daniel and the BSI hosted a great event.

I was really surprised how many people attended Friday. It was a little intimidating walking into a room full of about 40+ people (maybe Carl-Daniel can give us some official numbers). I settled in saying hi to a few familiar faces before we got started for the morning talks. The morning and early afternoon talks were very good I won’t cover them all here, please see the agenda. Most of the topics seemed to have bits of things that setup for the topics I wanted to cover later in the afternoon.

I had several talks prepared this year and my overarching theme was about scaling and growing coreboot. I’ve participated in numerous upstream efforts from vendors like Google, Intel, AMD, and Sage for the last year or more and have seen the number of contributors go from a few individuals to dozens of dozens.  The community has done a great job at digesting the huge amount of new code, members, and attention coreboot has received, but with the growth, we were starting to hit the limits of some of the current processes. Earlier in 2015, we’d made a number of changes to structure and organization, but we need to continue to formalize some processes and communication, so we can manage the influx of code and participation. Fortunately the community is very flexible and had already accepted most of this growth. I planned to discuss ways we can keep the flexibility, but add some light process to make community’s participation easier.

The topic of my first talk was the coreboot binary policy. What the community expects when contributing a binary to the separate 3rdparty/blobs repository. There seemed a general consensus that it was a good idea and discussion quickly went away from the policy and towards acceptance of a particular type of binary or if this policy would prevent vendors from pushing binaries. These were good points, but orthogonal to the need for instructing vendors what is expected by the community for binaries in the repository. The policy is still out for comment and review ( see post on the mailing list), but should be official shortly.

My second talk, with the help of Stefan and Patrick, was about working with vendors and some of the things we are doing to make the interaction easier. The main point was the coreboot versions and the quarterly release cycle, which had been announced in the spring. This cycle allows vendors and the community to plan feature releases and sync points to coordinate development.

The last talk of the day was presented by Stefan and me and was about the coreboot consortium and the progress is has made over the last year (which isn’t much). We are still stuck on it seeming like a good idea and vendors would like a consortium to exist, but we don’t have agreement on how and what should be done. This presentation was a call to action for the vendors that were present to engage the consortium and to get this ball moving for 2016.

It felt like I’d talked most of the day, but then it was off to dinner for some authentic regional German food and beer.

On the second day, we had a number of talks from David and Ron in California via Hangouts. I was impressed that it worked quiet well and kudos to those guys for staying up until 3am to present.

David’s talk on flashrom and the differences with the Chromium and flashrom source was really good. It seems that we may finally be able to re-merge the Chromium fork and that there will be some other changes to help flashrom get more participation. I think that it is moving to git and gerrit soon, and that there are just a few technical issues that should be sorted soon.

Besides the topics, the hacking room was starting to fill up and a lot of side discussions and ideas were being thrown around. One funny memory was seeing the building security person poke his head in and see all the hardware and soldering station covering the tables and walk away with a grin and shaking his head.

In the afternoon Card-Daniel had organized a trip to the The Government Bunker (Regierungsbunker). A cold war relic and now a museum. It is a massive structure and an impressive tour. https://en.wikipedia.org/wiki/Government_bunker_(Germany)

The last day was a focused hacking day. Again, lots of discussion and ideas for improvements and devices to port and hack on. I had an interesting conversation about mesh networks, German WiFi access rules, and the influx of refugees that are now arriving in Bonn. The volunteer maintained mesh networks allow the refugees to call home, find family, get news, and access the internet for services etc. There are rules in Germany about liability and responsibility of the WiFi access, so the mesh VPN to hubs that allow the clearing of that data. I found this all super interesting.

At the end of the day, I lead a discussion on community building and how coreboot can improve in 2016. The discussion was really good and very frank about some of the problems we are having (most of which people had been discussing in smaller groups all weekend). We came out of it with some specific actions we would like to do in 2015-2016.

Add more testing (the second most talked about side topic this year):

There are a lot of other attendees, so I hope that they chime in with their experience. I’m sure I missed lots of stuff. As for my talks, I hope that they were helpful and everyone should feel free to send me feedback.  Thanks again to Carl-Daniel and the BSI.

All the conference topics and other details are here: http://www.coreboot.org/Coreboot_conference_Bonn_2015

Intel has released the FSP 1.1 specification . Watch for patches on the coreboot Gerrit in the near future.

coreboot has been accepted as a mentoring organization for GSoC 2015! We are accepting student applications for coreboot, flashrom, and SerialICE projects.

Mentors:  Please signup in Melange and request to join the coreboot project. You must signup for 2015, even if you already have a Melange account. You may also find the GSoC Mentor Guide helpful.

Community:  Please recruit and welcome prospective students to the organization. You may provide ideas on the Projects Page.

coreboot has grown and matured a lot in the last few years and we have many new contributors and users. This growth has been something I have been thinking about for some time. I often ask myself what makes a good community? How does our community grow and flourish? How do we get new contributors and new students for GSOC. How can I contribute to growing our community?  These questions were on my mind as I attended the GSOC reunion in San Jose last fall and again later at the coreboot meetup in Prague. Discussions at both events helped shape my ideas, but GSOC reunion had some key elements to shaping a good community.

A reoccurring topic at GSOC gatherings is how to  expand project communities, keeping students engaged after GSOC, and how to get new students and contributors involved with projects. Normally, these discussions are among mentors, who are well entrenched in the FLOSS culture, are experienced developers, and have developed strong relationships within their project. Unlike previous mentor summits, the GSOC reunion was open to past students and mentors to attend, which brought a different perspective. Many of the students  were not involved in the projects after GSOC and we wanted to know why. This was an opportunity to hear from students about what worked for them and what didn’t work. Most of the students I met still used lots of open source software, but there were a number of reasons that they no longer developed on their GSOC project. Some students lost interest in the project, but still developed on other projects. Some students got jobs that didn’t deal with open source, but would do it again given the opportunity. Finally, there were some students (and mentors) that said that they didn’t like working in open source, that they were mistreated, forced or flamed out, or never felt welcome and appreciated. It is the last group that I wanted to make a difference in.

While most developers don’t experience something as terrible as the harassment that happened in the context of Gamergate or other terrible behavior documented at technical and open source conferences the last several years, it does indicate that there is a problem in our open source communities. This terrible behavior online and offline is unacceptable.  You shouldn’t be required to have a thick skin to develop open source. It should be a collaborative, not combative environment. We can’t lose valuable contributors because they felt uncomfortable or unwanted. A few mentors of large communities have had to deal with some really ugly incidents  (I’m trying to recall, but I think it was folks from Debian and Ubuntu among others) and they provided some great advice. The first was that mature communities should have some rules for behavior.  The second, and maybe more important, is that community members must point out when someone is behaving poorly. I felt that these were important point and started to consider how to make coreboot a more safe and welcoming place.

Typically, harassment, trolling, flaming, etc  is not a problem in the coreboot community.  We have a group that is generally friendly and helpful. We try to encourage good behavior and discourage bad behavior, but we could do more.  With a growing and maturing community we are going a step farther and describing what is unacceptable within our community with the coreboot Code of Conduct. It is a simple and straight forward statement about what we expect from out community members. The code of conduct is based on the Citizen Code of Conduct and similar documents in the open source community. Feel free to comment and provide feedback either publicly or privately.  Please note that this isn’t directed at anyone in particular or for a specific instance. It is part of “growing up” as an active and maturing community. 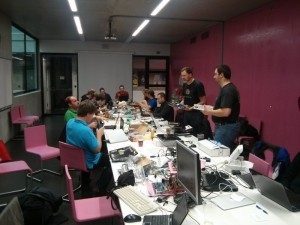 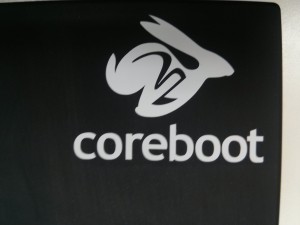 Woot! A new look for coreboot.org.  We have shifted the landing page from the mediawiki to WordPress. DON’T PANIC!, we are still using the wiki as the primary location for developer content. The new landing page and WordPress site is more visually appealing and is the location for news, blogs,  and other basic information for those that are just discovering and learning about coreboot.

Each student is required to post progress to this blog.  We expect first posts later this week. Stay tuned for progress!

We are excited to announce that coreboot has been selected for Google Summer of Code 2014.  As with previous years, coreboot will also support flashrom and SerialICE projects.

All the information you need is on the coreboot GSOC page and the following project ideas pages:

Mentors
To be a mentor, you must be a coreboot contributor in good standing (review and commit rights). If you would like to be a member, please add your name to the coreboot GSoC mentors section and signup and connect with coreboot in melange.

Feel free to contact me (IRC:marcj) if you have any questions.