Hi!  My name’s Robert Austin, and my GSoC 2010 project is to get TianoCore working well as a coreboot payload.   TianoCore is the open source component of Intel’s implementation of UEFI.  TianoCore on it’s own is not a BIOS replacement, but it can do some interesting things, and since a quite a few large companies are already committed to EFI, it makes sense to have an EFI payload as an option in coreboot.

I am very excited about working on this project, and working with the coreboot community.  I will make regular announcements about my progress here on this blog, and I will keep my working code available in a git repository here.  There isn’t anything there yet, but there will be soon.  To anyone who happens to checkout my code during the summer, I welcome any comments or suggestions relating to the style or quality of my code.  I want to write high-quality code, so feedback is appreciated.

It is my second year to join GSOC. In this year, i will take in charge of AMD RS780+SB700 mass porting. I would like to write down each progress here between this summer.

Today, the dediprog ISP-Testclip-SO8 has arrived. although it’s pretty expensive, but it seems pretty cute. I have already tested in in BTDC lab, hope it can helps me much more. 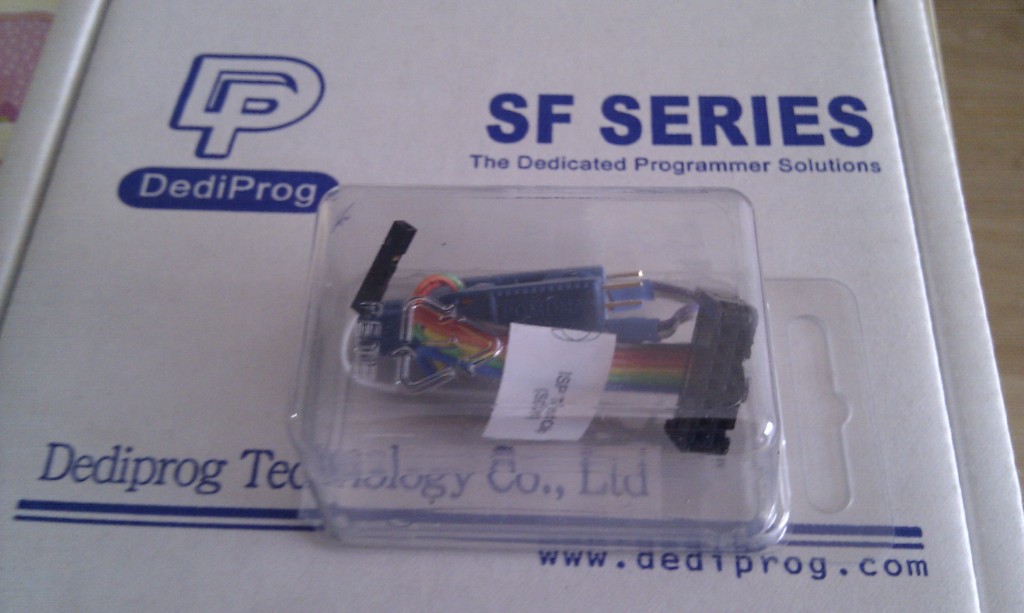 Welcome to the coreboot developers’ blog. This will become the place where our awesome Google Summer of Code students will log their progress during this summer. I’m really looking forward to all the great projects we are going to have this year. Of course, if you are a coreboot developer, and want to post here, drop me a note.

The Free Software Foundation has funded a documentary about the folly of software patents, titled Patent Absurdity: how software patents broke the system. The film is available in Ogg Theora format. If you have a modern browser (Firefox, Chrome, etc) it will play embedded in your browser thanks to HTML 5′s video tag. If you are stuck with IE, you can just download VLC to watch it. The film is also available for download and as a torrent. It is just under 29 minutes long, and highly recommended. As a personal note – it’s awesome to see the FSF bring together two of its campaigns, End Software Patents and PlayOgg, while staying true to its founding principles: the film was produced entirely with free software.

As you may know there's a Google Summer of Code program again this year.

The deadline for student applications is April 9th at 19:00 UTC, so if you're a student and you want to work on a coreboot (open-source BIOS / PC firmware) or flashrom (open-source BIOS chip flasher) project, please apply in time.

The following coreboot/flashrom GSOC project ideas have been proposed so far (but you can also suggest your own ideas, of course):

See this wiki page for why and how to apply for a coreboot/flashrom project.

There's a coreboot developer room at this year's FOSDEM (Free and Open-Source Software Developer's European Meeting), which starts roughly... um... today. In 20 minutes, actually. Unfortunately I cannot be there, hopefully there will be video archives of the talks. If you're at FOSDEM already, here's the list of talks:

Only few days ago a long-standing bug in coreboot, the Free Software x86 BIOS/fimware project, has been fixed: Adding support for a laptop/notebook. The code was developed by coresystems GmbH (thanks a lot!). Quoting from the announcement:

coreboot® is running on a multitude of different computers, ranging from tiny embedded systems as small as the palm of your hand over desktop and server systems to super computers with thousands of nodes. However, one might say that in the area of mobile computers coreboot has to catch up, compared to its support of other devices. Thus, I am especially glad to announce that ">coresystems GmbH is releasing coreboot® for the Roda RK886EX a.k.a Rocky III+ notebook today. It's a rugged notebook, protected against shock, vibration, dust and humidity: http://www.roda-computer.com/en/products/notebooks/rocky-iii-rk886ex.html We have been testing various Linux distributions as well as Windows XP and Windows 7 booting on this nice notebook. I want to sincerely thank those who made this project possible with their funding: A big thank you also goes to everyone who worked with coresystems on this project.

The committed patch series includes improved support for the Intel i945 / ICH7 chipset (which was also written by coresystems), the SMSC LPC47N227 Super I/O, the Texas Instruments Cardbus+Firewire bridge TI PCI7420, and finally the Renesas M3885x Embedded Controller (EC). Btw, the latter, the so-called embedded controller (sometimes integrated in the Super I/O, sometimes it's an extra chip) is one of the major problems for coreboot support on laptops. They are almost always undocumented (i.e., no public datasheets are available), but they have low-level control over power/battery management, early power-up sequence, and often include keyboard controller functionality and other important stuff. Luckily, for this notebook an EC datasheet is available. Checkout the coreboot EC support code for the Renesas M3885x for an impression of what this stuff is all about. Anyway, there is hope that this laptop will only be the first in a row of multiple supported ones in the future. Interested developers and contributors are of course always welcome on the coreboot mailing list :-)

Good news for kernel hackers, and especially coreboot developers like me: AMD has released the chipset documentation for the RS780 chipset, including the BIOS Developer's Guide. And these documents are being released freely and openly to the public, no NDAs required, which is great!

The coreboot community, which includes government organizations, corporations, research labs and individuals from around the world, is very excited to expand on our existing and decade-long collaboration with AMD. This collaboration has, over the years, resulted in the inclusion of coreboot into everything from some of the largest AMD-based supercomputers in the world to some of the smallest embedded systems.

Together with the recent SB700/SB710/SB750 documentation release, the Developer Guide release for the RS780 family of Integrated Chipset/Graphics Processors enables the coreboot community to support any board with AMD chipsets out there, from embedded to enthusiast desktop and high-end server boards.

This new release once again demonstrates AMD's commitment to open standards and software that provides an improved user experience and Total Cost of Ownership for users in every walk of life. One cornerstone of this openness is the availability of documentation without NDA, enabling everyone to contribute.

Coreboot is open source, so every interested developer or user can modify, tweak and extend it to their heart's content.

An additional benefit of this documentation release is flashrom support for all AMD chipsets which enables users to reflash their BIOS/firmware/coreboot from within Linux and *BSD without rebooting.

Coreboot code for the SB700 and 780 chipset family is already being worked on by Zheng Bao at AMD in his spare time and the coreboot community is happy to work with him on finishing and integrating the code into the official coreboot codebase.

We'd like to thank Sharon Troia at AMD for making these documentation releases possible.

I have mentioned the flashrom utility in my blog in the past. This is a small command line tool which allows you to update your BIOS/coreboot/firmware chips without opening the computer and without any special boot procedures.

Yesterday, flashrom 0.9 was finally released. Here's a short passage from the release announcement:

After nine years of development and constant improvement, we have added support for every BIOS flash ROM technology present on x86 mainboards and every flash ROM chip we ever saw in the wild.

Highlights of flashrom include:

Please note that rewriting your flash chip can be dangerous and flashrom developers make no guarantees whatsoever. That said, many users have successfully replaced proprietary tools such as awdflash, amiflash and afudos with flashrom.

Do yourself a favor and try flashrom next time you want to upgrade your BIOS. No more floppies or bootable CD-ROMs with DOS/Windows binaries or similar crap. Run flashrom conveniently from the Linux command line, or even via SSH or serial console if you want...

When trying to port coreboot (previously LinuxBIOS) to a new mainboard you're often confronted with a big problem: the BIOS/ROM chip on the respective motherboard is soldered onto the board (i.e., not in a socket).

This means that you cannot easily (hot-)swap the chip during development or for recovery purposes. So you basically have exactly one try to flash the ROM chip with a fully working/booting coreboot image. If that goes wrong your board is bricked.

This makes it pretty much impossible to develop a coreboot port for such boards (and soldered-on ROM chips are becoming more and more common, unfortunately).

However, I've recently tried to replace the soldered-on (PLCC) ROM chip on one of my boards with a socket. What sounds pretty scary at first, especially given that I have almost non-existant soldering skills, turned out to be really not that hard. Also, it can be done with relatively cheap and readily available equipment.

I have written a short HOWTO for desoldering chips and soldering on sockets in the coreboot wiki, and also finished a video showing most of the process, which I hope will be helpful for others:

The video is CC-BY-SA 3.0, music is taken from ccmixter.org and is CC-NC 3.0 licensed. Video editing was done using Kino (which uses ffmpeg2theora for Ogg Theora export).

I also tried to upload the video to Vimeo, but first they told me to install the Flash 10 abomination (and there's no way I will do that). After browsing the help/forum pages a bit I found a traditional, non-flash upload form, but that then tells me that I cannot upload Ogg Theora videos. WTF?

The Ogg Theora video support feature request has been open for more that a year. Until that issue is fixed I'll just use other video services, thanks...